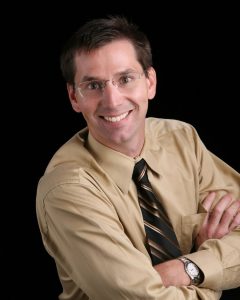 Shawn Kinser, DDS, PhD
Dr. Kinser received his bachelor’s degree in Chemistry from Hope College in 1996, and his PhD in Pharmacology and Toxicology from Michigan State University in 2000. After working in research for a few years he realized that he would like to help people more directly. He knew that he liked to do fine detail work and he loves science. Dentistry was a perfect combination of these that also allowed him to help people on a daily basis. In 2004 he entered dental school at the University of Michigan, and he received his DDS in 2008. He joined Belding Family Dentistry right after graduation and in 2016 he purchased both Belding Family Dentistry and Edmore Family Dentistry. Dr. Kinser met his wife, Mary at Michigan State University while she was in veterinary school. They live in the Greenville area and have a son and a daughter in elementary school. The family is in debate over the optimum number of pets, but for right now they have two cats indoors, and a horse and a goat outdoors. Dr. Kinser enjoys water sports, photography, and doing crafts with the kids. Interesting facts about Dr. Kinser: he is originally from the state of Washington and started competitive swimming at the age of 5. He held records for the fastest times at Shelton High School in Washington and at Hope College in Holland, Michigan.

Amy, financial coordinator
Amy received her associate of applied science degree in dental assisting from Ferris State University in 1977. She worked as a dental assistant for many years before transitioning to the front desk. Amy loved her dentist when she was a child and has always known that she wanted to work in dentistry! What she loves most about dentistry is making a difference in someone’s life by making a difference in their smile. Amy and her husband Jack have four adult children, and a pet rabbit named Arby. When Amy is not at the office she enjoys camping, mushrooming, home remodeling, deer hunting, and painting. Interesting facts about Amy: she collects Wizard of Oz memorabilia, and she has never had a Big Mac or a Whopper!

Chelsee, appointment coordinator
Chelsee joined our team in November of 2015. She wasn’t actually looking for a new job at the time. She came in as a patient and Dr. Kinser asked if she would like to apply for the appointment coordinator position. We’re glad she accepted! What Chelsee loves the most about working in the dental field is getting to help people every day, and learning new things on a daily basis. Chelsee just married her soul mate Mark this past summer. She is a Belding native, and has nine sisters and one brother! Chelsee and Mark have a cat named Smokey; Chelsee’s dog Chumpy still lives with Chelsee’s mom. In her free time Chelsee enjoys reading (murder mysteries and romance are her favorites) and crafting. She makes good use of Pinterest to find her next DIY project!

Connie, RDH
Connie received her degree in dental hygiene from Ferris State University in 2004. She also holds a bachelor’s degree and a master’s degree from Central Michigan University! She joined the Edmore team in November of 2012. She was initially drawn to dentistry because she wanted to be able to educate people about their health. She loves that she gets to work with patients of all ages. Connie and her husband have two daughters, and they share their home with two Labradors, two ferrets, and one cat. When she’s not in the office, Connie enjoys reading, spending time with family, and enjoying the outdoors. Interesting fact about Connie: she wants to retire in Africa and do mission work! She loves to travel and is always up for an adventure.

Cheri, RDH
Cheri received her dental hygiene degree from Ferris State University in 1988 and has been working in our Belding office ever since. She initially became interested in dentistry when she went through two years of orthodontics. Her favorite aspect of dentistry is getting to know her patients and establishing a relationship with them. Cheri has been married to her high school sweetheart, Kevin, for 30 years and they have two grown children, Kayla and Adam. Kayla was just married this past summer. Now that the kids have grown, Cheri and Kevin have a very energetic two-year-old chocolate Labrador named Bentley to keep them busy. On her time off, Cheri enjoys boating on the Muskegon River, camping, downhill skiing, and spending time with family. Interesting fact about Cheri: she is very competitive, almost to a fault!

Angela, RDA
Angela joined our team in May of 2017. She attended Grand Rapids Community College, obtaining her degree in dental assisting in 2016. Angela is a Registered Dental Assistant. She was drawn to dentistry because she wanted to learn more about oral health, and she was amazed how people’s appearance and health can be transformed by dentistry. Her favorite aspect of dentistry is educating our patients about how to maintain their dental health. She loves it when treatment is done and the patient is happy with the results; helping people achieve a smile they love is rewarding! Angela and her husband have three sons, and they live in Comstock Park. In her spare time, Angela enjoys family time, going to the beach, and attending her boys’ football games. Interesting fact about Angela: She is fluent in Spanish!

Kalika, GRCC Student
Kalika is studying dental assisting at Grand Rapids Community College, and she has been helping out in the office since the summer of 2017. We hope that she will join us full time when she graduates!